A lot of my 2015 was spent developing a large latex vacuum installation/performance especially for SPILL Festival of Performance 2015 (the biggest vac piece I'd ever attempted).
Was a challenge to work out how I could make a piece that could house 5 performers and that I'd be able to create a full vacuum just by my own breathing.
It took over 50 meters of latex to make, the base was largely made from scrap from dismantled bathroom sets.
Here's a brief overview of the making of it.
Tomb was supported using public funding by Arts Council England

Posted by Angels For Machines at 12:17 No comments:

Got these stills from the great video of my performance published on SPILL's site!
http://spillfestival.com/show/tomb/
I've always been hugely inspired by Ray Harryhausen and when I saw these images it occurred to me how much his work inspired this piece!
Tomb was supported using public funding by Arts Council England 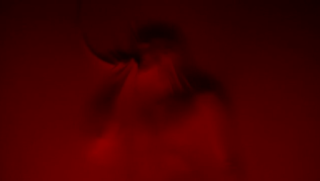 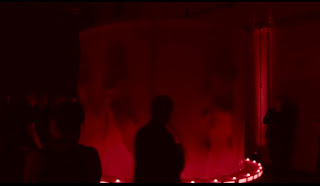 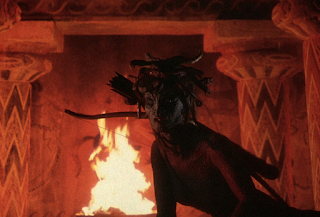 Bottom image: Still from Clash of the Titans

Posted by Angels For Machines at 02:43 No comments:

We are moving from the singularity of The Machine Legends at Spill Festival 2014 where Adam Electric dealt with fetishism and mythology, creating a singular performance [singularity] that placed the human body within a space of both absence and presence.  A second skin that only touched me through breath; a death-rattle that brought about a presence of the body.  His performance became a gravity well, drawing us in with a rhythmic gasping for life.  Both freedom and the delineation of the body became problematised through a constraint that also formed and gave life.  A singular projection of ego where space surrenders to vacuumed presence.

Moving toward this newest iteration, Tomb resonates with much of the festival workings, where memory and eulogy seem to be inscribed upon those other works.  A broken circumference of a plurality of plasticity; a remaking of the self à la Malabou and neuro-plasticity.  But this is not just a re-forming – like neuronal pathways – or singular transformation.  My breath is our breath, I breathe for you.  If breath is life, this is a shared life, but more; it is a shared shaping of bodies in the same [second] skin.  If kabbalists inscribe the name of God upon the Golem’s forehead to give it life, then perhaps this is what Nancy calls an exscription.

This is an impossible term, referring to that which is outside the text.  But ‘this “outside” is not that of the referent that signification would reflect’, it is not something outside of meaning to which the text refers.  But is what Nancy calls the ‘infinite withdrawal of meaning’.  He talks of an ‘“empty freedom” by which existence comes into presence – absence’, but this emptiness is not a lack as such, rather a dynamic movement of being.  Which is no-thing as such, not meaningful, but also not senseless.  Being is always with and I am never alone even being alone.  It is a primordial condition of my being that existence is shared.

Exscription travels through the text, contaminating it with a freedom, with a sharing that is the possibility of death which affirms existence, affirms others in the world.  So in this working, the meaning – the with – dances across plastic skin forming and erasing presence and absence in a breathless momentum.  In my own possibility of death, I desperately breathe – life – I create a space, an absent and present one, touching others.  A monumental tomb where I do not inscribe a eulogy, but exscribe the co-possibility of Being, which is both singular and plural.

Adam Electric moves his working on, not just on a grander scale, but in a reflective way that represents [as such] our existence with others in the world.  We do not die alone he seems to write, or perhaps tattoos, on his plastic skin.  We are always with others, who we touch, even when we are alone, because meaning always touches, always circulates between us, is able to be because we are with.
http://spillfestival.com/spill-stains-tomb-plastic-plurality/

Posted by Angels For Machines at 12:40 No comments:

Was a dream come true to perform at TG birthday ball at the Coronet Theater earlier this year, can't wait to go back! 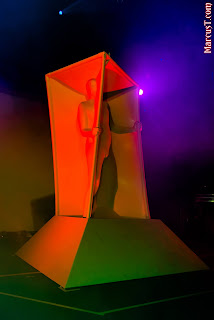 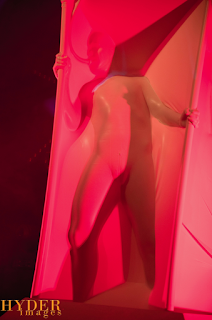 Posted by Angels For Machines at 11:55 No comments:

In Between Time Festival 2015

Just rediscovered these images from my performing the Diamond Angel at In Between Time Festival 2015, they sure captured how super shiny the latex was!!! 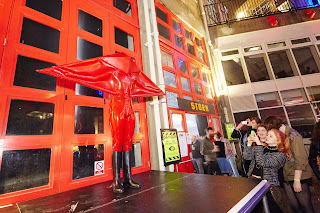 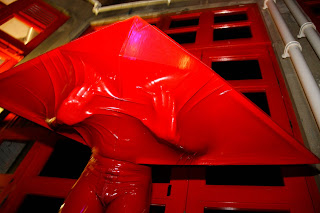 One of the amazing images resulting in the collaboration with photographer Manuel Vason. It looked great in the SPILL 2015 catalog! 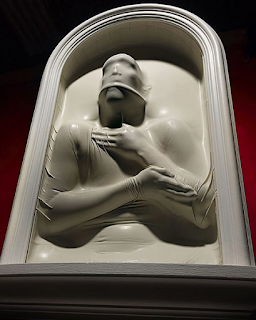 Over the past few days we have amassed memories from and onto bodies (and it’s Remembrance Day, and with all its complex politics, it acts as a frame, a gesturing echo). And amongst these, we’ve encountered condemned bodies, imprisoned bodies, narrative and subversive bodies. And today, when we begin with bodies encased in latex and end with a burning body, we consider our own relationships to structures and frames, to mediation and engagement.

I think of the confrontation with breath in Adam Electric’s The Tomb, the outlines of bodies in latex, sculptural and liminal (from womb to tomb). The uncomfortable encounter with this sealed, exhibited space of the other (in equal measure controlled and loose, living and dead), which both enacts and blocks affect (who are we, hearing this body and its cries, this dramaturgy of life and death and narratives of breath). The breath and voice become the poetics through which the confrontation is staged, as we consider the pause, the interruption, the being in between. This is a spectacle of struggle: in order for the vacuum to be maintained, breath needs to flow outwards and as it does, our relationship to the bodies changes.

The Tomb is both monument and sculpture; it is made by and through breath, which provides our own space of confrontation. I am confronted with suffocation (and its embodiment), with working through the body, with agency and invisibility, with these outlines that are constantly abstracted by the material, with their own howls and calls for response. (And I think of processes of life and death, of communication and shared languages).